Written by Amy Frank of Frankly Journaling the Journey.

A couple of years ago when I was moaning about how I felt so isolated, but also so surrounded by others’ needs, a friend pointed out how my stage of motherhood is not too unlike the calling of a monk.

Just as a monk has chosen to leave the normal lifestyle for a life of devotion, a mom who has chosen to stay home to teach her children has given up the typical career paths and goals of this culture in order to devote herself to a different calling.

I began to see the parallels.

But then I began to see the beauty in this kind of life as well.

Traditionally, abbeys or monasteries were known to be harbors of so much more than chanting residents. They were places where life and worship thrived.

Through the patterns of simple living and their singular focus and devotion, they were able to offer the world great benefits!

Often, the abbey was a place of great learning.

Through the years, monasteries have been the keepers of the written word, copying manuscripts, and elegantly embellishing scrolls and books. People came to be educated and to grow in knowledge.

One of my favorite quotes about education actually comes from a monk, Alcuin, who served under Charlemagne in the 700s AD. In his efforts to set up a school and teach children, he described his role as a teacher in this way:

I dispense the honey of the Holy Scriptures,

the old wine of the classics,

the fruit of grammar,

and the dazzling splendor of the stars.”

Whenever I need some inspiration in my own role as teacher, I return to this quote. He says it so much more eloquently than “I teach Bible, literature, grammar and science!”

I love to remember that, like the monks of old, I am responsible for passing along the written word and the mysteries of history, as a preserver of knowledge and wisdom. The abbey was also often a place of refuge.

Not just an isolated, barred off fortress, an abbey was open to all who sojourned through and needed rest or refreshment.

Strangers could come knowing that they would have adequate, albeit simple, accommodations for the night. They welcomed people from all backgrounds without question.

As we homeschool, I want to be that safe harbor for others.

We do not homeschool because we choose to remain separate from the world. Rather, we are hoping to raise children who will go out to encounter the world from a place of strength and knowledge.

And, as the world comes to us, we want to be the kind of open, welcoming door that will allow strangers in to be cared for.

The abbey could be a place of healing.

Monasteries were often known for their herb gardens and other natural healing remedies. They treated their own sick, as well as others brought to them, often having a whole space devoted as an infirmary.

Because the abbey as a whole was secure in their calling, their mission, and their purpose, they did not run from sickness, but rather embraced it.

Oh to be like this as homeschoolers! There are plenty of sick in this world, both literally and figuratively, and to have the firm footing and the secure knowledge of our purpose in life, allowing us to go forth and hold out healing, would be to bless the world.

Many of us are already armed with essential oils and herbal remedies and kombucha and kefir and other nutritional strategies, and we are helping to heal physically one step at a time.

But there is also a greater healing we can be working towards as we pour truth and grace and love into our children.

May they go forth offering remedies to the world! I want my home to resemble an abbey in these ways –a place of learning, of refuge, and of healing.

There are other elements of the monastic life I am glad to avoid (such as the vow of chastity and the tonsured hairstyle!), but the beauty and simplicity of a devoted life, without all of the rushing around and distractions of the world, are the elements that delight me.

May we, as the abbeys of old, hold out truth and light to this dark world.

(Note: I highly recommend “The Hawk and the Dove” book series by Penelope Wilcock for an inspiring view into monastic life hundreds of years ago.)

Do you see homeschooling as a higher calling too? 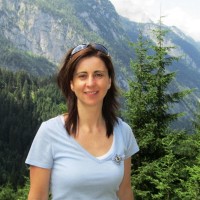 Amy Frank is a homeschooling mother of four in North Carolina. She journals about her family life at Frankly Journaling the Journey.