The following is a guest post written by Charity Hawkins, author of The Homeschool Experiment.

It was a late Wednesday night after church. I had planned to give my three kids a snack then send them immediately to brush their teeth and get ready for bed. My husband was working late, and I was ready to be done with the day.

Then my eight-year-old son asked if he could play “Jingle Bells,” for me on the piano, and I was so thrilled that he was finally excited about piano that I said yes. Then my six-year-old daughter begged to play. Of course, my three-year-old son wanted a turn next.

The minutes were ticking by and I thought, why did I ever agree to this anyway? We were an hour past bedtime already. I could feel my blood pressure rising. Then my son and daughter started bickering—one being bossy, the other whining. Nobody was listening to me.

Eyes wide, the kids stared at me, frightened, then hurried to obey.

I won. But at what cost?

You see, I tend to struggle with anger. I didn’t realize it so much until I had children, until I saw their tender faces crumple, saw tears roll down their cheeks.

As if their hearts were glass, and I crushed them in my furious fist.

I’ve wept many times over the harsh words I’ve spoken to my children, wishing I could take them back. Sometimes it’s like approaching a cliff: I know I’m getting close, I can feel myself beginning to get  “irritated,” or “annoyed,” or “frustrated,” (all code words for angry), and then, before I know it, I’m yelling.

That night at the piano I didn’t yell, but I got too close to the edge. I was speaking and acting in anger, and my kids felt it, and they deserve better.

That night I wrote in my Anger Journal, or renamed in a positive light, my Gentleness Journal. This is one practical tool I’ve found very helpful in understanding why I get angry and how to prevent it in the future. Here are some questions I ask in my journal:

What happened BEFORE I got angry?

What could I do NEXT TIME to respond better?

I also have some questions that remind me to be proactive in gentleness too: Did you speak gently but firmly when giving instructions? Did you expect the kids to listen and obey, but consistently and kindly correct them if they didn’t? Did you praise each child for what they did right today?

These have all been helpful as I walk the path to be a gentler mother.

Today my two oldest were begging to help me sort their clothes in the attic, and I acquiesced. But within about three minutes they were driving me nuts. I was trying to focus and sort eight years’ worth of baby and children’s clothes, complete with approximately twenty-seven thousand mismatched socks.

They had promised to be quiet but couldn’t manage to keep themselves from skipping around clutching at all their old toys, grabbing clothes willy-nilly, and incessant question-asking. I began to get annoyed (angry).

I realized I needed to just say no. So I told them, “Thank you for your hearts to help, guys, I really appreciate it, but I just don’t have anything you can help with right now. When I get to the point you can help, I promise I will let you know.”  I held firm, even when they cried in disappointment. But that’s okay. Sometimes I will need to say no to things.

It’s much better to say “no” or “wait” on the front end with gentleness, than to let my children talk me into something and explode in anger later.

It was a small step, but I’m thankful for it. It’s a long road, this road of motherhood, so I want to  celebrate each step in the right direction.

Do you struggle with anger at your children? What are some strategies you’ve found to deal with it? 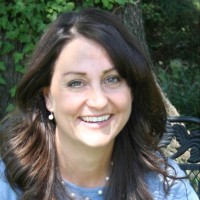 Charity Hawkins is the author of The Homeschool Experiment: a novel. She lives, learns, and has adventures of all kinds in Tulsa, Oklahoma.