The Georges are a homeschooling family of 7 that lives in a caravan and spends most of their time in Far North Queensland, although they are nomads. In fact, many people in their home country are!

Kelly shares that and many other fascinating facts about Australia with us today. Check out her blog Fearless Homeschool for more inspiration from down under!

Hi! My name’s Kelly, and I’m married to Daniel. We have five children. Gabrielle is 12, Holli and Asha are identical twins and are 11, Rex is 10, and Forrest is 7.

This is not uncommon in Australia, especially for people who have retired – we call them grey nomads. We call ourselves rainbow nomads, as we’re not grey yet, and our caravan is very colourful.

We spend most of our time in Far North Queensland as Daniel is studying here. It’s a beautiful place-it’s the only place in the world where two World Heritage areas meet (Great Barrier Reef and Daintree Rainforest). We have a very low population density. Australia averages 3 people per square kilometre, while the United States averages 35.

Most Aussies live on the east coast. That combined with our climate means that we can spend a lot of time in nature (we call it ‘out bush’). There are places you can camp and not be able to hear or see another person. It’s something that many people do regularly-the Indigenous Australians call it ‘going walkabout.’ We’re also very multicultural. Just under a quarter of Australians were born overseas, and 43% have at least one parent that was born overseas.

Growing up, I had friends who were Croatian, Vietnamese, Greek, Persian, Sri Lankan and Chinese. It was very normal to go over to a friend’s house and their parents not speak English very well, and to get served unidentifiable but absolutely delicious food!

Lastly, we have very unique animals. All of our mammals are marsupials, which means they all have pouches. The platypus and echidna are mammals that lay eggs – and the platypus is venomous too!

When Captain John Hunter sent a platypus pelt and sketches back to England in 1798 they thought he’d sewn different parts of animals together to trick them-they couldn’t believe such a thing existed! We have an awful lot of dangerous animals too – we have 21 of the top 25 venomous snakes (including the inland taipan, the most poisonous snake in the world), the most poisonous jellyfish, crocodiles, sharks, bird eating spiders … but it’s actually really safe here, promise!

English is the only official language, and most Australians aren’t bilingual unless they’re immigrants or the family of immigrants.

There’s even a joke about it:

What do you call someone who knows three languages? Trilingual.

What do you call someone who knows two languages? Bilingual.

What do you call someone who only knows one language? Australian.

We do have our own special version of English though – here are some funny expressions you may hear in Australia.

With our short history and immigrant population, we don’t have many ‘Australian’ foods.

We eat kangaroo, but it’s not common – most of the meat eaten is lamb and beef. But we can get all sorts of exotic food here. We also claim Vegemite, lamingtons, meat pies, and pavlova as ours (but the Kiwis say they came up with pavlova).

Most of Australia has a great climate – it only snows in the high places, and even then it’s not reliable. Australians who like to ski and snowboard usually fly to New Zealand!

Cairns has a wet tropical climate – it’s hot and wet in summer, and slightly less hot and wet in winter. There’s lot of vegetation and beautiful flowers, and lots of wildlife-including geckos, crocodiles, and giant pythons.

Right now it’s the middle of winter, but we’re still all wearing shorts and T-shirts, and going swimming! We have a National Curriculum now, so it’s the same all over Australia. Most kids go to kindergarten at four. School starts with Prep at five years, then grades 1-6 at primary school, and 7-12 at high school.

The day starts around 9, and finishes around 3.30. We start our year in summer, in January, and finish in December. There’s four terms of around 12 weeks, with a two week holiday between each term, and a longer summer holiday.

After that you can go to university, with a degree taking at least three years, do an apprenticeship, or go to TAFE, which trains people in more practical skills, such as hospitality and trade work.

We homeschool, so our days suit us! We usually do most of our bookwork on Monday and Tuesday. We really like English, history, and science so we spend the most time on those.

We have a weekly work list on the wall with the work each child needs to do for that week, and they choose when to do it and tick off the work as it’s done. Right now Friday is for homeschool group, which is always great fun. We typically work until we’re tired, usually about 6-8 weeks, then have a few weeks off until we’re ready to get back into it again. Our work all gets done in the end without too much stress.

Are there any special festivals or traditions you’d like to tell us about related to where you are visiting?

Australia doesn’t have many festivals. We have a short history, and a somewhat shameful one, in how we’ve treated our native people.

Many people celebrate Australia Day on Jan. 26, which is the day the First Fleet landed in 1788, but other people call it Invasion Day and refuse to celebrate, as this was the day the Indigenous Australians started to lose their homeland.

ANZAC day is April 25th, and it commemorates the landing of the Australian and New Zealand troops at Gallipoli in 1915. There are services in every town to remember all the Australians who have served, fought and fallen in all of the wars. We usually go to the dawn service.

If you moved countries, what would you miss most?

The weather, and the outdoor lifestyle. We’re outside for most of the day, every day.

It’s also very casual-people don’t care too much about what they look like. Everyone just wears shorts and T-shirts, and it’s normal to go out barefoot. When we went to Melbourne recently we kept forgetting to wear shoes, and it’s not normal to go barefoot there – we got a lot of funny looks!

I think I’d also miss the Aussie sense of humor – if you’re friends with someone you tease them a lot. I have to be careful with my friends who come from other countries, as they might think I’m being mean!

We also love Australian poetry. Our favorites are: Thank you so much, George Family! 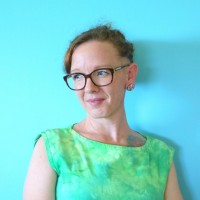 Kelly George is a married mum to five adventurous children. None have ever been been to school, and they all like it that way. She runs Our Homeschooling Days and Fearless Homeschool while travelling Australia in a rainbow caravan. One day she’ll go back to writing assignments instead of homeschooling articles and finish the last five subjects in her nursing degree.

Write your own permission slip
Next Post: Weekend homeschool links