It was painful to choose just a snippet to share because the extended scenes—and the books from which they were drawn—are all so good!

The Lion, the Witch, and the Wardrobe by C.S. Lewis

“It was a sledge, and it was reindeer with bells on their harness. And on the sledge sat a person whom everyone knew the moment they set eyes on him. He was a huge man in a bright red robe (bright as hollyberries) with a hood that had fur inside it and a great white beard that fell like a foamy waterfall over his chest. Some of the pictures of Father Christmas in our world make him look only funny and jolly. But now that the children actually stood looking at him they didn’t find him quite like that. He was so big, and so glad, and so real, that they all became quite still. They felt very glad, but also solemn.

“I’ve come at last,” said he. “She has kept me out for a long time, but I have got in at last. Aslan is on the move. The Witch’s magic is weakening.”

“They gave themselves then with abandon to the sweet delight of choosing. It was almost pain to choose. Each fragile bauble was gayer, more enchanting than the last. What each one chose she would take home; she would see it on the Christmas tree; she would see it year after year; if she were lucky and it did not break.

They walked around and around the table, touching softly with mittened hands. Betsy at last chose a large red ball. Tacy chose an angel. Tib chose a rosy Santa Claus. Winona chose a silver trumpet.

…They walked to Ray’s Shoe Store, smiling, holding Christmas in their hands.” Little Women by Louisa May Alcott

Merry Christmas, little daughters! I want to say one word before we sit down. Not far away from here lies a poor woman with a little newborn baby. Six children are huddled into one bed to keep from freezing, for they have no fire. There is nothing to eat over there, and the oldest boy came to tell me they were suffering hunger and cold. My girls, will you give them your breakfasts as a Christmas present?

They were all unusually hungry, having waited nearly an hour, and for a minute no one spoke, only a minute, for Jo exclaimed impetuously, I’m so glad you came before we began!” “Matthew had sheepishly unfolded the dress from its paper swathings and held it out with a deprecatory glance at Marilla, who feigned to be contemptuously filling the teapot, but nevertheless watched the scene out of the corner of her eye with a rather interested air.

Anne took the dress and looked at it in reverent silence. Oh, how pretty it was—a lovely soft brown gloria with all the gloss of silk; a skirt with dainty frills and shirrings; a waist elaborately pintucked in the most fashionable way, with a little ruffle of filmy lace at the neck. But the sleeves—they were the crowning glory!

“That’s a Christmas present for you, Anne,” said Matthew shyly. “Why—why—Anne, don’t you like it? Well now—well now.”

For Anne’s eyes had suddenly filled with tears.” Little House on the Prairie by Laura Ingalls Wilder

Then they put their hands down inside them, to make sure.

And in the very toe of each stocking was a shining, bright new penny!

There had never been such a Christmas.”

Merry Christmas! What scenes would you add to this list? 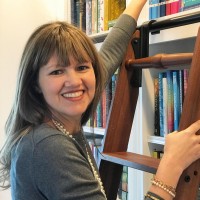 Anne is a certified bookworm and homeschooling mom to 4 crazy kids. She loves Jane Austen, strong coffee, the social graces and social media. You can find her blogging at Modern Mrs Darcy.