Today I’m excited to introduce you to the Seddon Family of Lancashire, England.

The Seddons are a Charlotte Mason-influenced homeschooling family who loves nature – in fact, the mother Lynn even wrote a book about exploring nature together!

We are the Seddon family: mum and dad, Elianna aged 13 years, and Rose aged 10 years. We have always lived in Lancashire, which is a county in the northwest of England.

“We have a beautiful forest and park near where we live. I usually walk my dog Boomer in the forest every day.” ~ Elianna

Lancashire is a beautiful, green place. The reason it is so green is that we have so much rainfall!

There’s a mixture of rolling hills, beautiful forests, old coal mining and cotton mill towns (the Lancashire coalfield was one of the most prolific in England.) We have castles, cathedrals, and many beautiful churches – it is such a lovely corner of England.

“I have a nice garden, and lots of room for pets. There are lots of shops to buy Pokemon cards. We have a big canal with a pond that has lots of fish, ducks and tadpoles.” ~ Rose

England is full of regional accents, and although many no longer speak with a regional tongue, they are definitely still heard, especially amongst the older folk.

Here is a Lancashire folk song on YouTube that is sung in traditional Lancastrian accents:

From YouTube: “It is a classic English folk-song example of where the words, in this case a lament regarding the brutal changing economic conditions just before the start of the Industrial Revolution, are sung to a tune which is almost jolly and happy.”

Each region of England has its own traditional fare, here are a few traditional Lancashire dishes:

A dish made traditionally from lamb or mutton (older sheep that has a much stronger flavor and tougher meat than lamb), onions and chopped potatoes, which traditionally would be left to bake in the oven all day in a heavy pot and on a low heat.

Well known to Lancashire folk, this is an extremely sticky, chewy sweet (candy) that is eaten on Guy Fawkes Night, the 5th of November each year.

(Guy Fawkes Night is a commemoration of the discovery of the “gunpowder plot,” where by Guy Fawkes attempted to blow up the House Of Lords in London, and consequently, King James I.) As I mentioned earlier, Lancashire is a very rainy county, with an average of 174 days of rainfall per year.

Our seasons are usually pretty distinct, although on the milder side. For example, we only had a couple of days of snow last winter, but lots of rain! Compulsory education begins in the UK at age 5 (though children as young as 4 may begin school) with what is known as “primary education.” At age 11, the child then starts “secondary education,” upon moving to a high school.

At age 16, the young person takes a number of exams known as GCSEs, and then begins a two-year stage of education known as “sixth form” or “college,” which involves studying a small number of subjects and taking exams known as “A Levels,” or the other option is to take more vocational studies, such as BTECs.

“School looks like a big building and inside there are rooms full of chairs and you sit on those chairs and learn.” ~ Eliana

I discovered home education when my now 13-year-old daughter was just 4 months old.

I read the home education series by Charlotte Mason, whose influence over the British education system has sadly been lost. It touched my heart, and I try to apply her principles to our days. My children began formal academics at around age 6-7, which was much later than their school attending peers. We also have much shorter lessons until high school age, based on the principles of Miss Mason.

My children do need to take exams however, so we need to follow the GCSE syllabus at some point, and Elianna began the biology course last year.

* From Lynn: It is a standing joke in our house that I am always finding people’s socks everywhere! Are there any special festivals or traditions you’d like to tell us about related to where you live?

There are many traditional feast days here in England, and we try to celebrate them throughout the year, in a laid-back fashion.

A favourite is Michaelmas, the feast of Saint Michael and All Angels, celebrated on 29th September each year. As Michaelmas falls near the equinox, the day is associated with the beginning of autumn and the shortening of days, and provision and protection during the cold months to come.

Traditionally, a well-fattened goose, was eaten to protect against financial need in the family for the upcoming year and there is a old folk rhyme that alludes to this:

“Eat a goose on Michaelmas Day,
Want not for money all the year.”

In our home, I prepare a beef and vegetable stew, and we also usually bake jam tarts made with blackberries, and dragon bread.

Traditionally, Michaelmas Day is the last day that blackberries should be picked. We decorate our table with the pretty Michaelmas Daisies that grow abundantly at this time of year; summer’s last hurrah!

“I really enjoy the Eurovision song contest! I stay up late with my sister , mum and dad to watch it on the television. Some of the songs are really very silly.” ~ Rose

If you ever had to move away from where you live now, what do you think you’d miss most?

“I would miss the lane behind my house where I play with my dog, Boomer. I would also miss the pond where I paddle with the tadpoles.” ~ Rose

“I would miss a local vegan cafe/restaurant that makes amazing food.” ~ Eliana

Hard Times by Charles Dickens is a book that has really spoken to me on my home educating journey.

Dickens visited Preston (a city in Lancashire) in January 1854, during the Preston strike of 1853-4 which closed the cotton industry for several months. He later wrote Hard Times; set in Coketown, a fictional version of Preston.

Perhaps my favourite book is Wuthering Heights, written by Emily Brontë and published in 1847.

Wuthering Heights is mainly set across the The Pennines (a range of mountains and hills in Northern England) in the county of Yorkshire. However Mr. Earnshaw, the owner of Wuthering Heights, brings home an orphan boy named Heathcliff from Liverpool, which is very close to Lancashire.

A tale of all-encompassing and destructive love, Wuthering Heights swiftly became my favourite novel as a young teenager.

“My favourite book is the Hobbit. The Shires are based upon traditional English countryside; Tolkien’s inspiration being the midlands, where he grew up.” ~ Elianna Thank you so much, Seddon Family! 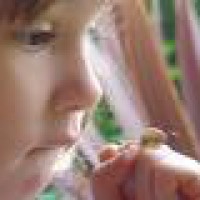 Lynn writes about nature study and home education at Raising Little Shoots and is the author of Exploring Nature With Children: A complete, year-long curriculum.