I’d found myself in the habit of saying “No” to my daughter. We had been in a busy and stressful season of our lives, and I lost perspective of what was important. I let outside influences dictate how our days looked. We hadn’t played a game in weeks, read alouds had stalled, and nature hikes were all but nonexistent.

I’ve always been intentional about leaving space in our homeschool and lives, but something happened this year. It’s funny how after ten years of homeschooling, I find that I can still lose our homeschool rhythm and need a refresher course on how to handle being burnt out.

It took a few months, but I began seeing the toll my choices took on my daughter. When she asked me something, she automatically expected me to say no. I began to feel the loss of what our homeschool used to be.

I let life get in the way of what was truly important.

It began to weigh heavily on my heart, and guilt filled me. I felt like a failure as both a mom and a homeschooler.

What if I said Yes Instead of No

““Parenting has nothing to do with perfection. Perfection isn’t even the goal, not for us, not for our children. Learning together to live well in an imperfect world, loving each other despite or even because of our imperfections, and growing as humans while we grow our little humans, those are the goals…” ― L.R. Knost

We had the opportunity to go to a nearby national forest and picnic. My daughter was so excited she asked if she could bring her bathing suit to play in the stream.

My first thought was, “No.” It was fifty degrees on the mountain, and the stream was even colder! She’d freeze, right.

But something gave me pause, and I wondered.

Instead of saying “No,” I told her it would be okay to play in the stream, but it would be cold. Did she want to bring extra clothes and towels just in case? I didn’t want to deny her the fun of getting wet, but I also didn’t want her to get so cold she had a miserable time.

My daughter decided she’d wear layers with her bathing suit on underneath. She packed extra towels and then asked me if she could make the lunches for the picnic. I thought, why not? So I said, “Yes.”

My daughter asked her Papa and her brother what sort of sandwiches they wanted and then made and carefully packed them up for our day trip. She was so thrilled and proud of herself, and I suddenly had an epiphany.

Why had I been saying “No” so much lately? Why not say “Yes” instead of “No” when I can? Say Yes Instead of No…When You Can

“Every day, in a 100 small ways, our children ask, ‘Do you hear me? Do you see me? Do I matter?’ Their behavior often reflects our response.” – L.R. Knost

The impact the word “No” has on our children is powerful. It’s amazing how those two letters can shut down engagement and learning. The opportunity to explore and learn is lost. Relationships can suffer.

I was focused too much on the must-dos and left no room for fun, spontaneity, or passions.

How easily a “No” said once can turn into a “No” continuously. I realized that by saying “No” more often, I was hurting the relationship with my child. My daughter quickly learned to expect “No” and therefore stopped asking, and I wasn’t listening to the silence. At least not at first.

“No, you’ll get your clothes dirty.”

“Will you play a game with me?”

Luckily, I figured out what I was doing before too much damage was done.

I repaired our homeschool and relationship by eliminating the outside stressors that had given me blinders. I became more mindful of my actions. Learning to Say Yes to Our Children

Kids can’t get everything they want all the time. The word “No” must be used to help teach our children to be safe, and children need to learn to accept the word “No” when there is a good reason.

What I’m saying is take a step back and evaluate the why’s of your “No.” Is it a knee-jerk reaction? Is there a good cause for it? Do I have too many things to do? Do I not feel like doing it? Am I saying “No” because that’s what I was told growing up? Is this thing important to my child?

I want to build strong connections, increase confidence, self-esteem, and give my children autonomy. That doesn’t mean I’m a pushover, and my child always gets their way. It means that if I don’t have a solid reason to say “No,” then I’m working on saying yes. Being a Yes Parent

“BIG connections are created when BIG people care about the little things that matter to little people.” – L.R. Knost

My daughter had a fantastic day playing in that cold mountain stream. She splashed and played for hours. I think the trout got a surprise when she fully submerged herself to get a better look at them.

When she got cold, she dried off with a towel and put her layers of clothing back on. Everyone had a delicious lunch, thanks to her.

Saying “Yes” isn’t always easy or convenient. It often means a little more work on our part, like helping my daughter clean up the kitchen after she made the lunches. It would have been so much easier to do it myself, but then I would have been denying her the opportunity to learn and grow.

We are building relationships with our children. Your limits may be different than my limits or your neighbor’s limits, and that’s okay.

I feel the key is to say “Yes” or “No” consciously with thought put into the answer. In instances when you would typically say “No,” maybe ask yourself, why not yes instead? 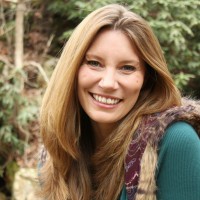 Erin Vincent is the wife to her best friend and homeschooling mother of two in the foothills of the Great Smoky Mountains.

Every day is an adventure in their eclectic interest-based education; at Nourishing My Scholar, Erin shares how she strives to find what works best for her children’s individual needs while maintaining her own physical and mental wellbeing.