Written by Hannah Vanderpool of Praying with One Eye Open

I’ve noticed something about my fellow homeschoolers. As a family’s kids get older, the parents tend to get quieter online, at least where homeschooling is concerned.

It’s probably not because they’ve run out of ideas for how to incorporate science into their teenagers’ days, or because there aren’t plenty of funny one-liners they could report.

It’s probably because those of us with older kids sense that our teens need increased privacy, and that, before long, their educational journeys in our homes will come to an end.

And, anyway, if we think about it, we’re just glad blogs didn’t exist when we were their age. I’m one of those moms who felt like there was plenty to discuss when I was homeschooling 5-, 6-, and 7- year-olds. But now that my husband and I have a teenager, I suddenly feel at a loss for what to add to the online conversation.

There are stories I can’t tell these days — struggles that will stay between our own four walls out of respect for my kids.

The truth is that when I talk about homeschooling now, I end up talking about me, not math. I write about how I hope all the years at home have served my kids well, hoping I’ve done enough of this or that, or that I’ve said enough “I’m sorrys.”

Will the future be kind to me, I wonder, as I see this strange and sweet chapter nearing its last few pages? I don’t know. But what I do know is that, for the last ten years, I’ve been homeschooled along with my kids, and I’ve had to learn my own share of lessons.

Here are 10 things I’ve discovered in my 10 years of homeschooling:

1. Really learning something takes time, sometimes more time than you think it should.

And that’s ok. Getting impatient with yourself or your kids doesn’t make a new concept sink in faster. It just makes all of you angry, and then sad.

2. Boredom can be a hallway on your child’s way to an imaginative room of possibilities. Or it can just be boredom.

If it’s the former, push through. If it’s the latter, go to the library or Sonic, and be done with it already.

3. People learn (and homeschool) in a variety of ways.

Letting your kid watch a documentary on an interesting topic is not fake homeschooling. It’s one legitimate way to discover something new.

And it won’t turn kids who read into kids who stare off into space and mumble.

4. But books are something special. 5. Criticism has its place, but that place is further down the table than you might think.

I have helpfully critiqued my kids’ writing, math, and public speaking with gusto, and, you know what? I’ve never seen it get through to them the way starting a sentence with, “Here are all the things I think you did well” seems to.

The effectiveness of the whole praise-before-criticism thing always catches me off guard until I think about receiving feedback on my own writing projects. Then it makes perfect sense.

6. Sometimes it’s okay to quit on a boring read-aloud.

It really hurts me to type that, but it’s true.

I’ve done it and the homeschool police didn’t show up at my door. Also, my kids mostly finish their own books as teens, so it didn’t cause them to be quitters.

7. Homeschool moms are just women who need to eat sometimes.

And sleep. I trust that needs no further explanation. In fact, it can be a way for us to model for our kids the idea of going after something we love, even if (especially when?) we aren’t getting paid to do it.

It is okay to get things wrong sometimes. Everyone does. Even teachers in brick-and-mortar schools.

You and your kids will survive.

And super slow. But mostly fast. There have been many days I wanted to teleport to the future because, math!

I still do, sometimes.

But more often, I want time to slow down because my son sounds like a man when he talks now, and I still have some more things I want to say…

What lessons has homeschooling taught you so far? 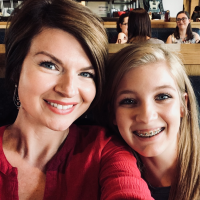 Hannah Vanderpool is a writer, a world traveler, and a homeschooling mom to two great high schoolers and a middle schooler. She can’t imagine a world without sisters and books. You can find her at Praying With One Eye Open.

Inspiring homeschool links
Next Post: Get your kids hooked on Shakespeare with 5 easy steps