Written by Sarah Mackenzie of Amongst Lovely Things

No one likes to be outnumbered. If you’re in a soccer match and the other team has more players on the field than you, it feels like defeat before you begin.

Being outnumbered is daunting enough. But to have three toddlers? All at once? That’s a madhouse even if you aren’t trying to teach the oldest pre-algebra and cover the details and implications of The Louisiana Purchase at the same time.

My friend Trina recently said that the difference between surviving and thriving is the simple act of savoring… there is always something sweet worth leaning into. And I think she’s right. The temptation I faced all year long was to default to survival mode. “It’s really hard,” I would tell myself, “but it’s only for a season. Soon it will be over, and we’ll have calmer days. We’ll be able to get to that history project or read that book together or do more than merely hang on for the ride each day.”

But there’s no savoring in a statement like that. And anyway, I don’t have any grace for tomorrow- for that “someday” when I don’t have toddlers underfoot anymore.

I don’t have grace for it because it’s not my reality. These toddlers, emptying the kitchen cupboards onto the floor, again. Pulling books off shelves with wild abandon. Filling their diggers with scoopfuls of dirt in the backyard and unloading them into little piles on my kitchen table. Again.

And lest you think my toddlers are the only hard ones, my school-age children picture-perfect, let me disabuse you from that way of thinking. She’s crying over her math lesson. He’s not even trying to name those notes correctly in his piano book. There’s complaining. Bickering. Eye rolling.

This is what I have grace for. This moment, where I am pulled in too many different directions and I’m unsure of how to proceed, this is what I can turn into a thriving moment by simply learning to savor it. This past school year, I’ve simplified to such bare bones that on numerous occasions, I’ve had to stop and really consider if home was still the best place for my kids to learn.

There was a lot of doubt. A lot of overwhelm. I cried. It was all probably exacerbated because I’d just written a whole book on teaching from rest and unshakable peace.

I got to live that book in a refining-fire kind of way, and it was hard.

Frankly, there is nothing out of the ordinary or wildly impressive about doing the daily things. Math problems, listening to the history audio book, capitalizing proper nouns, hashing out a spelling list. I’m finding that the hardest part of homeschooling with toddlers and babies underfoot is that the vision that lived in my head since I first dreamed up this crazy idea to homeschool looks nothing like my reality.

There aren’t really that many field trips. I don’t feel like my kids have hours upon hours to pursue their passions. Much of our day is doing the next math problem, writing the next spelling word, putting away the laundry, sweeping the entryway floor.

It’s daily and ordinary and not the spectacular, passionate kind of lifestyle that I once dreamed it to be.

But I’m okay with that. Finally. Maybe? I’m still working on being okay with that.

Because I have grace for this life, this reality, not the one I fancy. The savoring happens in the now.

What has helped me to savor, amidst the daily chaos:

It may not be the wildly elaborate and inspired set of homeschooling plans, the most beautiful vision I had dreamed up. But it’s our reality. It’s our life, our education, and it’s what we have to savor today. Next year, I very likely will be up against the same challenges. Rather than chasing after 1- and 2- year olds, I’ll be chasing 2- and 3. Based on the last month’s happenings, I’m not thinking that’s going to be a mite easier.

But I’ll make things as simple as possible. I’ll let my kids lose themselves in books to round out the edges and fill in the gaps.

And I’ll trust that He’s got this, even when I’m not enough, even when I mess up, and even when the day spins off its tracks and looks nothing like I wanted it to.

Because He does. Because I’m not. Because I will. And it will too.

And that’s worth savoring.

Babies and toddlers — whew! How are you savoring these messy, crazy days?

This post is part of our Hardest Part of my Homeschool Year series. 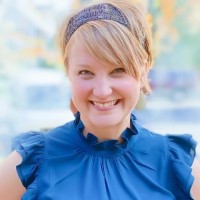 Sarah is a smitten wife, mama of six (including twins!) and the author of Teaching from Rest: A Homeschooler’s Guide to Unshakable Peace.
She hosts the Read-Aloud Revival Podcast and spends her time running the vibrant, active membership community there.